After Pretending To Lose All My Money, I Learn Of Human’s True Nature 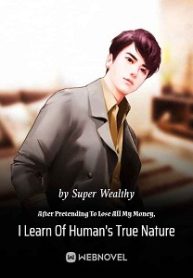 When Jiang Feng’s family mansion was forced to get demolished by the government for development, he was compensated with ten million. The moment he received the money, a system appeared.

Choice 1: Show off your ten million. Allow your relatives to mooch off you and send expensive wedding gifts to your girlfriend. Reward: Title – Good Person.

Choice 2: Invest everything in Bitcoin for huge profits in the future. Reward: One hundred million. (One-time deal)

Jiang Feng didn’t even hesitate to choose the second choice. He invested everything in Bitcoin and made a hundred million.

However, he posted a different story online.

“I lost everything in cryptocurrency. I’ll have to start all over again.”

The moment the post went online, all sorts of demons and devils appeared.

From that day onwards, Jiang Feng finally saw the true nature of humans.

I Can Enhance My Talents Using Unlimited Skill Points - Chapter 452

Bruh of the Twin Pupil Eyes only have a few overlapping worlds how can it compare to a body that has inner worlds for each cell....

I Can Enhance My Talents Using Unlimited Skill Points - Chapter 451