Are You Telling An Eight-Year-Old To Survive In The Wilderness? 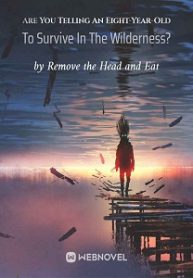 The live show, Survive in Wilderness was a hit.There were thousands of participants in the game show. They would all start by parachuting from a plane and land randomly in a primary forest.The participants would have to rely only on a backpack, a water bottle, and a dagger to survive.Yu Beier was only eight years old when he joined the game show so that he could buy the cure for his ill mother with the prize money. He was the youngest to have ever participated, and he had accidentally woken up a wilderness survival system.[Ding! You have received the Wilderness Survival 101 Pack!][Ding! You have received Max-leveled Hunting Skill!][Ding! You have received Max-leveled Building Skill!][Ding! You have received Max-leveled Swing Skill!]…When the show started, the viewers were utterly shocked. From climbing the tallest mountain to crossing the ocean, conquering the forest and swamp, and managing an island, there was nothing that Yu Beier could not do.“Dude! That eight-year-old boy is living a much more interesting life than us!”“Yu Beier is the apex among men!”“Whenever I see his stream, it feels like I’ve just lived an extra life!”