I Turned My Four Useless Brothers into Big Winners in Life 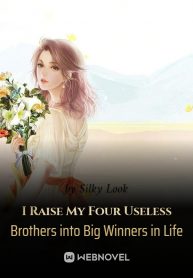 It was common knowledge that the Ci family was full of useless individuals.Mr. Ci had taken over the family business, but he did not even have an heir that he could pass the business down to.The young masters of the Ci family expressed repeatedly, "We don't want to take over the family business. We just want to eat, enjoy ourselves, and live out the rest of our days."The only daughter of the family, "Dad, as long as I use the company as my dowry, my Prince Charming will marry me!"Mr. Ci's unfilial children almost exasperated him to death.Until one day, all his children straightened themselves out and saw the error of their ways—The eldest son became a business elite, the second son became a popular live streamer with countless followers, the third son aspired to be a master chef, and the youngest son became obsessed with learning, unable to extricate himself.The youngest daughter, who used have eyes only for her male idol, suddenly changed. Not only did she stop pursuing her Prince Charming, but her four brothers also doted on her.The youngest daughter said, "Dating is meaningless. As long as my brothers treat me well, that's good enough."A certain elegant man lightly tugged at the corner of her shirt. "Suisui, come with me. They don't treat you as well as I will…"