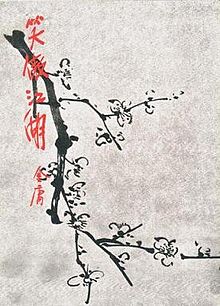 The Smiling, Proud Wanderer is a wuxia novel by Jin Yong (Louis Cha). It was first serialised in Hong Kong in the newspaper Ming Pao from 20 April 1967 to 12 October 1969. The Chinese title of the novel, Xiao Ao Jiang Hu, literally means to live a carefree life in a mundane world of strife. Alternate English translations of the title include Laughing in the Wind, The Peerless Gallant Errant, and The Proud and Gallant Wanderer. Another alternative title, State of Divinity, is used for some of the novel’s adaptations.

You'll make him lose, just by yourself? Girl, I think you're still lost in the dream realm

Sunggoo my boi you can do it~

The Beginning After The End - Chapter 283

I imagine Alaric as Jack Sparrow but I kinda want arthur to keep his appearance rather than changing his clothes, he looks badass in his outfit (also stunning and got that drip)