Echoes of Fire and Shadows 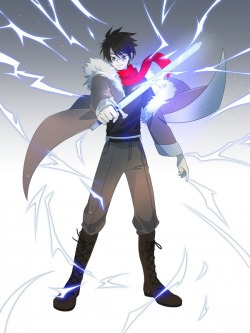 Julius, a twenty-year-old law student, suddenly finds himself trapped in a void where the color white reigns supreme... A place full of nothingness... In that realm of emptiness, Julius meets a mysterious man who informs him of his death and the reason why he has found himself in that empty void.

When Julius found out about his death, the memories of his last moments of life flooded his mind. After Julius remembered his own death, the mysterious man introduced himself as Melius, the God of Light and Creation.

Melius was in a predicament, he had been sealed in that white void. He offered Julius a deal; Destroying the seal that imprisons Melius in exchange for the head of the one responsible for Julius' death.

To make this deal possible, Melius was going to reincarnate Julius into the world he rules over. Having nothing to lose, Julius agreed to this and was reincarnated into another world.

Neither the mortal, Julius nor the immortal deity, Melius would be able to predict the impact of their deal in this new world, its people, and its gods... Even the neighboring worlds might be affected, including Julius' former home, Earth.