I Became Invincible After Sweeping The Floor For 70 Years 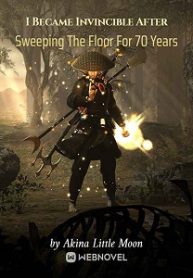 Qin Chen was transmigrated to the Taiyi Holy Land where he became a servant in charge of sweeping the floor. However, on his 16th birthday, he was rewarded with a system where he was rewarded whenever he signed in at a new place.

When he signed in at the Empire Ruin, he was rewarded with the strongest Chaotic Holy Body and the Chaos Emperor Scripture.

When he signed in at the Demon Sealing Land, he was rewarded with the Probationary Royal Armies.

When he signed in at the Alchemy Palace, he was rewarded with the Divine-grade Alchemy.

When he signed in at the Herb Garden, he was rewarded with an Immortality Elixir.

When he signed in at the Empire Palace, he was rewarded with the Emperor-grade Divine Art, Revival.

Qin Chen thought he could just spend the rest of his life signing in at different places until he became invincible.

However, when the ruin of the Great Kingdom appeared inside the holy land, people from other holy lands, prestigious families, and even ancient empires gathered to defeat the All-Powerful Demon King who appeared with the ruin. The Demon King had killed countless people and had planned to destroy the Taiyi Holy Land.

Qin Chen was left with no choice but to step up. When he killed the Demon King with a single slap, he sighed, “Why do you guys have to force a mere servant to act?”

Beginning is nice. Lots of cliches. MC gets once in a lifetime opportunity, contracts a hidden master, cripples a young master by kicking his third leg and crushing his left nut, yada yada. It becomes a drag around halfway through the story (around chapter 100s). POV shifts to MC's subordinates and man it really sucks to see things through their eyes. It takes around 30 chapters to explain that they spray snake juices on the border city, and trick the governor into fighting a snake, which they also spray snake juices on, which causes snakes in the area to go ham and attack everything in sight because all they can smell is snake zaza (snake p****). [Utter complete bullshit summary]. It gets good again around school arc, where MC just ignores everyone and beats the crap out of people who…