Login Before Others: Stone Age 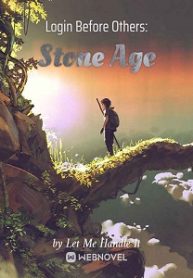 Human Origin: Tribe was a virtual reality MMORPG. The player would start from the stone age, build tribes, and slowly develop their culture.

It had attracted countless players of all ages on the day the game was launched and it quickly became the most popular game ever.

However, no one knew that the game was actually created by aliens using a high-dimension technology called the Knowledge Child. Just a year after the game was launched, it started to devour reality.

Chen Ran was a high-level player and was regressed back to the day before the launch. He was able to enter the game earlier than others.

[Effect: 10000x increase for the land to philosophers, literateurs, scientists and other professionals that would lead the growth of a civilization.]

He took all of those things before others could even learn of them.

A year later, the game was finally officially launched.

When the players logged into the game, they were dumbfounded by what they saw.

“Are you sure this is the stone age?”

Another year later, the aliens were about to invade Earth, thinking that the human civilization had collapsed.

However, Chen Ran stood on top of one of the 10 thousand Star Destroyer Canon and yelled, “Don’t look down on us humans!”