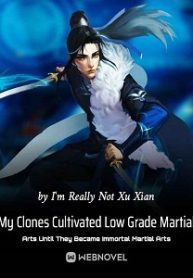 Su Jie transmigrated to a world of xianxia. He did not have a spirit root and his martial arts talent was average. However, he discovered that he possessed the Spirit Imprint talent. As long as he placed his spirit imprint, be it plant or animal, they would become his clones!

When his clones trained, Su Jie himself would benefit. He could easily master a martial arts technique to completion or even the Immortal Martial Artist Plane that surpassed all limits!

[Demon Ape Vajra Punch]: By cultivating the Demon Ape Body of Vajra, his body was impenetrable and his strength was unparalleled. He could topple mountains with his Body of Vajra!

[Heavenly Silkworm]: The Heavenly Silkworm metamorphosed and broke out of its cocoon to become a butterfly. It transcended life and death, so it was undying and indestructible

[Demonic Prana of Dragons and Elephants]: After awakening the Demonic Prana, a divine martial arts technique, his power would be boundless. The sky changed color at his command and he could crush both the heavens and the earth.

Not only did Su Jie cultivate martial arts to an unprecedented plane, but even all his clones also became existences that were feared and adored by the world.

Demon Ape King, Lord of the Bohai Sea, the World Tree…all of them were his clones.