My Sister Exposed My Identity As A Villainous Godfather 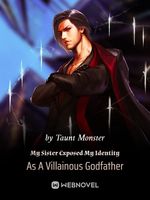